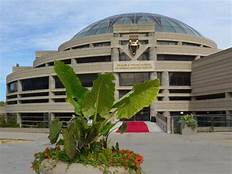 The Board of the Charles Wright Museum of African American History held their annual community meeting on Thursday, Dec. 6, 2018. This was an opportunity to list their accomplishments for the year and layout what is planned for the coming year.

They also discussed the financial standing, their search for a new president, and answered questions about an upcoming exhibit.

There were passionate, yet cordial, discussions about a proposed Thomas Jefferson exhibit, the direction of the museum, and the makeup of the Board of Directors.

The museum board seems to be composed of about 20 people, all with extensive corporate backgrounds. One of the criteria for membership to the board was being able to make a $10,000.00 payment/donation to the museum. It was not clear if all of the people had made that payment.

David Rambau, a writer TV producer and community activist, made an observation that was serious food for thought. Of the museum’s $6.9m budget, they receive about $2 million from the city and another $200,000 from memberships. This totaled about a third of their operating budget, if each of the board members paid their $10k.

Mr. Rambau rationalized that if this is the case, there should be more representation on the Board from the community who, as taxpayers, contribute to the $2m plus the MAAH spends during the year.

The Board makeup was one of the primary concerns of the community groups. This is important because they determine the direction of the institution, and the types of exhibits offered.

The proposed Jefferson Story is clearly one with opposing views. The Board apparently favored the idea of telling the Thomas Jefferson story through the eyes of Sally Hemming and her family. “This is a story that needs to be told” said George Hamilton, interim president.

Several community members, me included, voiced our opposition to more stories, books, plays, movies and exhibit that include this flawed man. They stated, the community is tired of this continued storytelling of our victimhood and are exhausted from having the word “slave” being associated with African Americans. The very word slave is a corruption of the word “Slav” which is of eastern European. They were the first slaves.

Shaset Kemet, in her book “Medieval Upheaval”, talks about how Europeans routinely sold their children, wives, neighbors and servants into slavery. We are so much more than ex-slaves was the message. It’s time to tell the other stories of who we are. Our young people don’t want to hear about our enslavement. They will positively respond to information about all the heroes we have in our American history.

There have been so many rumors floating around the Wright, its staff, and operation. One major rumor was whether Ms Juanita Moore was dismissed or fired.

We, UIN, interviewed her on our television show “7 Days”. She talked about her accomplishments and her upcoming retirement. She loved her job; however, she stated she was ‘retiring to take care of her aging Mother’. We called her after her retirement to find out if there was any truth to these rumors and she said no.

Rumors spread because of a lack of communication. We, at UIN, do our best to get relevant information to Detroit’s majority African American community. Unfortunately, they rely on so-called mainstream media for news and information. The problem is such that in this 85% Black city, we have maybe 5% input into broadcasting, reporting on, and analyzing the news in Detroit.

This is not normal and it is not sustainable. We need to empower ourselves and we have to believe we are capable. Talking about slavery is not going to get us there.