We in the media are in a privileged position.  We get special invitation from entities to their meetings. We get to cover important events, they put us upfront and in some cases, they even feed us. To top it off, we get in free.

The reason for this treatment is that we broadcast their messages or in some cases their propaganda. In providing this serviced to the public, we get to hear more of what is going on with issues that people should care about. So, when you couple this access with interview we do with people in the know, we have an accurate pulse of the citizens we cater to. So, we  know more about the issues that matter to the urban community. It just makes sense.

Now, what does all this have to do with the election? Well, we at UIN covered the Democratic Convention in Philadelphia, and we covered Hillary’s rallies and 2 Trump appearances in Detroit. What we found was that the Trump supporters were far, far more enthusiastic about their candidate than the Democrats we spoke to were for Hilary. While they said they would vote for Hillary, I could see no excitement when they mentioned her name. From this polling, I have been telling people that if it rains on election day, Hillary, will lose. It rained on election day in Detroit. People who watch Detroit IPTV were not surprised by the outcome because we talk to the experts and the community. Our viewers know what is going on.

When all the votes are counted, Trump got about the same number of White voters that Romney got when he ran against Obama. This means that despite all the nasty, racist, and classless things Trump said and did, 90% of White people voted for Trump. Apparently “white is more important than right”

Even this is not the reason Hillary lost. She lost because the non-white people did not support her with Obama numbers. Democrats took Black voters for granted as usual and this time it cost them big time. 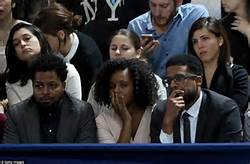 As it relates to Michigan, I reminded the Democratic party that Hillary lost the Michigan primary. The Black media including UIN told our readers, viewers and listeners to at least check Bill and Hillary’s record. I believe they did that and enough young people and Black males took a pass and denied Hillary a victory. Please note that we did not tell people to not vote for her, to just do some checking.

You would think that the Democratic Party would heed the message and cultivate the Black vote. They did not. They spent no money with Black media, none. The 1 billion that was spent to elect Hillaryillary went to the usual suspects, their friends and relatives in mainstream media. What a waste.

Two weeks before the election, I requested someone from the Democratic Party to come on “The Boardroom” a panel discussion show that we produce and televise. I did this for them to make a more compelling case for Black folks to come out strong. We did not hear from them. We had to do the show with 2 Republicans

Then, when Obama came to Michigan in the last week, he went to Ann Arbor, not Detroit.

The last point I want to make is this. Traditionally, the Mayor of Detroit is the leader and spokesman for Blacks in Michigan. However, in their infinite wisdom, Detroiters elected a Whiter Mayor from Livonia. So, the leader for Black people in Detroit is a White guy from the suburbs. My friends in Atlanta laugh at us.

So, 9 out or 10 White people voted for Trump. Hey, can you blame them. They are looking out for their interest they think. I don’t know who the Michigan Democratic Party listened to, but if they offer the same script for the next election, we will be further in the hole. We don’t need a new plan, we need a plan.

Maybe this election will get Black folks to realize we need to build our own institutions and stop giving our many talents to build other folks dreams and not our own. Two things are true no matter who is in the White House; one is that we have the genes of our ancestor who survived condition far worse than Trump may bring and two is, on the first of the month, the rent still must be paid.