Save our schools; oust Trump & DeVos!

In 1999 the DeVos family bankrolled our state’s Republican governor and legislature to take over Detroit’s public schools.  Those Lansing officials then dissolved our elected DPS board and replaced the DPS administration with appointees who briskly set about removing any vestige of our city’s proud democratic history.  The state’s appointed DPS emergency managers changed the names of schools like Finney High that memorialized a Detroit family of ABOLITIONISTS. 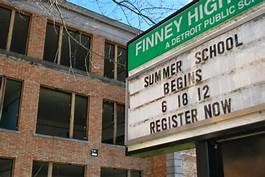 They removed the sign with the words ‘John Telford Track’ from the Finney track site and demolished the school, replacing it with a newly-built one they named “East English Village.”  In 1964, I had become the then-fledgling high school’s first-ever track coach after having gone undefeated sprinting on the U.S. team in Europe and then having coached champions for three years at Southeastern.  Ironically, the new school isn’t even IN East English Village, and very few residents of EEV attend the school now bearing the EEV name, nor do they represent it on the track which ostensibly still bears MY name (even though that ‘John Telford Track’ sign is long gone–see the photo of me standing beside it with my old Finney track star Ken Howse after the 2003 track-naming ceremony).   Lansing’s DPS appointees tore down and rebuilt three of the city’s better high schools, tore down others out in the neighborhoods, sold another, and let many more decay.  They did nothing to oppose the encroachment of a hundred vastly inferior charter schools in the city, and they colluded in a second Republican governor’s commandeering fifteen DPS schools that then became a quasi-district euphemistically dubbed the Educational “Achievement” Authority.  Those EAA schools ultimately failed dismally and were returned in neglectful disrepair to DPS.  In 1999, DPS students’ test scores had been at the state midpoint, and the school district had enjoyed a $125-million surplus.   During the two-decade-long state takeover, that $125 million–plus an additional $3.5 BILLION–was squandered and stolen.  Now re-named ‘Detroit Public Schools Community District’, the short-funded “new” district has inherited student test-scores from the takeover that became America’s lowest, and its SAT scores declined further this year.
Prospects for the majority of DPSCD students appear bleak, with Democratic governor Gretchen Whitmer facing a Republican-dominated legislature, with the addled Betsy DeVos serving as Trump’s secretary of education, and with the racist Trump supporting her cuts to traditional public education in predominately black-and-brown-populated districts.  This pathologically narcissistic, mendacious, Neo-Fascist false president has broken our country’s word on a nuclear treaty with Iran, allowed thousands of hurricane victims to die in Puerto Rico, refused to grant Bahamian refugees temporary protected status, put Hispanic refugee children in cages, weakened our alliance with western Europe, fomented a ruinous trade war with China, and cozied up to murderously treacherous oligarchs in North Korea, Saudi Arabia, and elsewhere–plus one in Russia who helped him cheat to get fraudulently elected in 2016 and will try it again in 2020.  Donald Trump seeks to destroy Social Security and health care, he has fostered egregious tax breaks for the rich while illegally enriching himself, and he has committed an additional blizzard of sexual, corporate, and borderline-treasonous offenses too multitudinous to add here–not to mention his having disavowed the deadly-real and immediate threats of domestic terrorism, mass shootings, and  global warming.  Detroit–along with the rest of the world–is in dire danger with this amoral, anti-American buffoon.  We’ve got to get him out of the White House post-haste–preferably in time even faster than my 46-second quarter-mile races for Wayne State and America in the 1950s.
Former DPS Superintendent John Telford, a one-time world-ranked sprinter, now serves as DPSCD Poet-in-Residence.  His Detroit-oriented books can be ordered in stores or on amazon.com (type in Dr. John Telford).  Hear him Saturdays at 9:30 a.m. and Mondays at 6:30 p.m. on WCHB AM1340, also streaming on Detroit Internet Television (DETipTV.com).  contact him at DrJohnTelfordEdD@aol.com or (313) 460-8272 for signed copies of his books.  His website is www.AlifeontheRUN.com.  Friend him on Facebook.