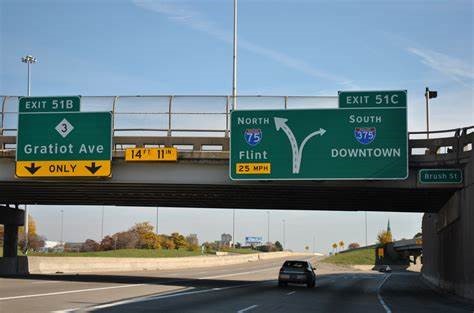 Group initiates David and Goliath battle with MDOT on I-375

On Thursday night at local landmark, Bert’s Place, a group of courageous Detroiters took a stand and said enough is enough. Instead of tweeting, talking and posting, they came together to fight MDOT’s “Great I-375 Pave-over” plan.

This strip of highway erased Hasting street which was the heart and soul of Black Detroit. An oasis and sanctuary surrounded by bigotry, discrimination and hatred. It was Black Bottom and their Paradise Valley.

Much like The Tulsa Massacre ( What Was the Tulsa Massacre? – YouTube ) except without the government bombs and mass murder, this thriving Black community in Detroit  was utterly destroyed by the White power structure on all levels.  Urban renewal erases Black Bottom area in Detroit – YouTube

I-375 freeway was built in its place. Now that the Black residence have been replaced with upper income Whites, MDOT  and the city government is making an extremely insulting and disrespectful claim to fill in I-375 to reconnect the two communities and right a wrong.

This project however, will only benefit the white residents of the area and the contractors who do the construction. It is being done with OUR tax dollars and without the input of the citizens who will pay for it.

So the group, facilitated by the ladies of the “Sisterhood” show on Detroit IPTV came together to make their wishes known. They are telling city Council members to stand with them and not with the power brokers.  We hear the term “sell out” when speaking about Council  members. It is imperative that they work with the Mayor to get things done but the citizens must be respected as well.

It is a fact that the Mayor has to get the approval of City Council for all of his initiatives. However, the relationship where a White man has to get the OK of a group of Black people is not typical in our society. So this current crop of Council may feel obligated to bend to the will of the Mayor.

Well, the group that met on Thursday will make it easier for Council to stand with the people. The footage of the meeting will air on Detroit IPTV (detiptv.com) on Sunday. For updates, send your email address to info@uintv.net