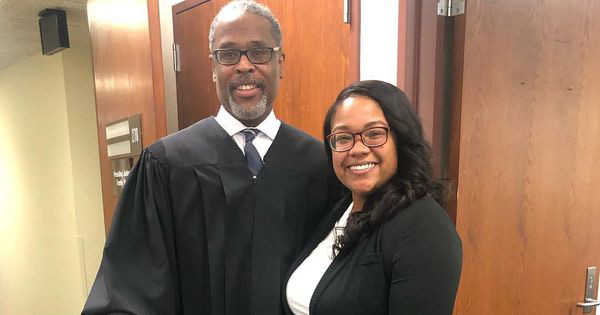 Camden, NJ — When Carmen Allen Day was a teenager, she told New Jersey Superior Court Judge Charles Dortch that she regetted her mistake and she wanted to become a lawyer if he reduced her probation sentence. Now, after 12 years, Day is just one semester away from her law school graduation.

Day, who was then 17-years old, had plans for college and law school until she got involved in a juvenile offense. She was so embarrassed and she regretted doing such unwise decision at a young age. She pleaded with Judge Dortch, who gave her a chance and reduced her probation sentence from 18 months to 6 months.

Now 29 years old, Day is a married woman with 2 daughters and is just one semester away from graduating from Rutgers Law School, which is also Dortch’s alma mater.

Just recently, Day visited the courtroom with other law students. Dortch, who is now the presiding judge of the family division, was surprised to meet Day after 12 years and know that he somehow changed her life. Day said what Dortch did restore her

“He didn’t see me as a docket number, or some poor girl from Camden,” Day said. “He saw me as a girl who needed help, who needed a chance.”

Dortch took it as a proud moment. He said, “I could even say it made my career.” to read more of this story, click here: